Crossing over: A video primer for print journalists 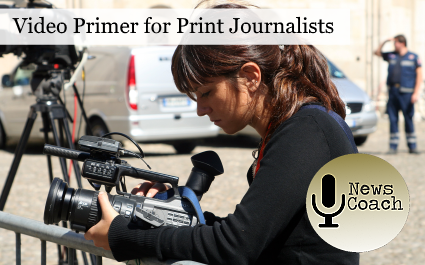 This is the first in a series, aimed primarily at print and radio reporters who are asked to produce video reports. For multimedia journalists, these skills are a must. And for video reporters, it's a reminder of key elements that can make your stories stand out.

I’m on overflow. So it’s high time to address you directly! Over the years, I’ve had the privilege of working with many accomplished print reporters who choose to- or are asked to- provide video reports for their websites. Some of you have chosen to ‘cross over ‘ for various reasons.

While I’ve always wanted to turn the world on its ear and question rules, I admit that the majority of video reports are based on a long-lived logical structure. And when they’re done well, you’ll rivet me or move me to tears: Warm/happy or moving/sad.

The purpose of this three-part series is to provide some clear, simple information to help you create a semblance of a reporting plan, and feel good about your results. Please understand that it’s an extremely pared down, ‘Here’s what generally works best’ primer, with the goal of switching  ‘daunting’ into ‘stimulating.’

For radio reporters: I love radio, and I encourage you to read this, too. By removing the video component, almost everything here will hopefully resonate with you as well.

Lede lines
After your NAT sound you’ll have written one or two short, strong lines. With reference to my above ‘I’m on overflow’ comment, your first written and tracked (voice-over) sentence should be terse and hopefully attention-getting. For both video and radio, your lede (the longtime newspaper spelling for lead, which rhymes with seed) line comes first. In other words, video/radio journalism begins with the punchline. Again, two sentences are okay, but keep them short.

Soundbites
We have the makings of a strong beginning: Nat sound + a lede sentence or two that pack some kind of wallop and make us want to watch. Now let’s add a strong soundbite (SOT- sound on tape) from a protagonist in the story. Remember that your soundbites should ideally be from the people who are the story, or who are directly involved in the story. If this is  impossible, ‘talking heads’ can add value, but be judicious. When used, they generally should appear more toward the middle of your package.

Sentence structure
I was going to begin this blog with “My brain has become too full with…” but the right–brain alarm sounded: Too many bouncing syllables going nowhere! Hence, “I’m on overflow.” Keep your sentences simple, and if you’re choosing between two words, pick the one with the shorter syllable count.

Also, sorry Mr. Reynolds (my 9th grade English teacher), but for oral/aural journalism you can start sentences with IF... AND... SO... BUT. And remember that embedded phrases will separate the noun from the verb, making your information harder to follow. It's best to start a fresh

sentence. For example, instead of, ‘Ted Cruz, now holding the second position in the Republican polls, announced today that...’ use, ‘Ted Cruz now holds second place in the Republican polls. Mr. Cruz announced today that…’   One last little tip: I’d forget writing with commas. They appeal too much to a print way of thinking. Try using [ ... ] or [ - ].